We are now in Ho Chi Minh City (Saigon, Vietnam) after a seven hour bus trip which included a ferry across the Mekong and the border crossing at Bavet (Cambodia) - Moc Bai (Vietnam).

Saigon is a large bustling city that is more established/organised than Phnom Penh and also much larger.

Visited the Ben Thanh market, Notre Dame Cathedral and the Central Post Office in the time we had this afternoon.

Tomorrow I leave Ho Chi Minh for Bangkok and then on to Jomtien/Pattaya.

I plan to return to Ho Chi Minh and travel up to Hanoi sometime in the not to distant future.

Day two in Phnom Penh included a visit to the Genocide Museum at Tuol Sleng (former office S21 1975-1979) where many thousands of men women and children were detained, tortured and killed.

We also visited the "Killing Fields" of Choeung Ek were the bulk of the executions and burials took place.

We are now in Phnom Penh, the capital of Cambodia, after a  four hour local bus trip. Luckily the bus was air conditioned as it is always hot and humid at this time of year.

It has been good to spend a couple of days relaxing at Sihanoukville both on the beach and at the beach bars at night. We had a BBQ Ochheuteal Beach the second night which also became a birthday celebration for Chris, a member of our group.

Photos Involving Members of The Group

The group has now arrived in Sihanoukville on the Southern coast of Cambodia. It took about five hours in the bus to get here from Chambok. Most of the afternoon was spent on the beach. The beach is probably better than Pattaya and less crowded but there are a lot of locals trying to sell goods on the beach and they are a bit to aggressive for my liking.

We left Kampong Cham yesterday morning by public bus for Phnom Penh. The trip took about three hours and it was hot and humid and therefore quite uncomfortable as the air conditioning did not work. We had a rest break along the way at a place where there was Tarantulas, grasshoppers & and roast baby wild ducks for sale.

After spending two hours in Phnom Penh we had a private bus to take us to our homestay at Chambock. We spent the night in a traditional Cambodian village house after having a local meal provided by the nearby Eco centre.

Sunrise Over The Mekong River

Snacks at The Rest Stop Between Kampong Cham & Phnom Penh

Today we left Siem Reap for Kampong Cham via public bus which was comfortable and air conditioned. The trip took about five hours and included two ten minute rest stops.

Kampong Cham is a town of around 50,000 on the Mekong river. It is a typical Cambodian town and not on the tourist trail.

I went for a walk around town and checked out the local market and shops. I was quite surprised at the size of the Mekong river as I expected it be quite narrow at this point but it is probably about five hundred metres wide.

In the afternoon most of the group rented bicycles and we went along the Mekong for a while and then across the Mekong on a bamboo bridge to Koh Paen. Koh Paen is an agricultural island producing a wide variety of fruit and vegetable. It has a village population of around 10,000 people.

I am now in Siem Reap, Cambodia, on the Intrepid Travel "Cambodia Basix" trip. We left Bangkok two days ago and travelled by bus to the Cambodian border at Aranyaprathet before going on to Siem Reap. The road used to be called the "Dancing Road" due to its roughness but it has recently been upgraded and was good all the way.

There were not too many tourists around as this is the off season but it was very hot and humid and therefore quite tiring.

Today is a free day so I will be spending some time by the swimming pool.

I went for a walk around town early this morning to check out the locals etc. The markets are very similar to those in Thailand with a combination of fresh food for the locals and souvenirs, clothes, shoes etc. mainly aimed at the tourists.

All of The Photos From The Angkor Archaeological Area

In Bangkok for the beginning of the Cambodia Basix tour starting tomorrow. I went for a ride on the local ferry up the Chao Phraya River and did a bit of strolling around.

Temple on The Bank of Chao Phraya River, Bangkok

All the "Red Shirt" protestors were here in Pattaya over the weekend to disrupt the ASEAN meeting and embarrass the Prime Minister (which they did). There was no risk to the general public and their protests were relatively peaceful. Yesterday they all went back to Bangkok to continue the protests. One of the reasons there are so many people involved is because a lot of them are on holiday as it is the "Songkran Festival" (Thai New Year).

I find it strange that the news media only cover the protests and are not covering the New Year celebrations etc. Combined with the Songkran festival is the water throwing festival which has become an all in water fight. I went into Pattaya twice today and came home completely soaked on both occasions.

I am going to Bangkok next Sunday to start my trip to Cambodia and Vietnam. Hopefully the protests may be over by then.

The "Wet Season" may be starting as we have had afternoon thunderstorms for the past few days. I went into Pattaya the other day after a storm and all the drains had become blocked flooding central Pattaya.

I have booked another trip with Intrepid "Cambodia Basix". The trip is 13 days and goes from Bangkok to Ho Chi Minh City (Saigon, Vietnam) via Cambodia. This will be my last trip for a while as I am planning to do a complete re design of all the City Directory sites.

I went to Bangkok yesterday to pick up my visa for Vietnam. I had arranged it online and was led to believe that I just needed to go to the embassy and pick it up. It turned out that I had to make two trips to the embassy, luckily I had come in the morning and was able to return four hours later to pick up my passport with the visa in.

I have just got back after a week away on an organised group tour. It was called "Tap Into Thailand" and run by Intrepid Travel. I got a 20% discount as I booked close to the departure date and there were plenty of vacancies.

The tour started in Bangkok then overnight sleeper train to Chiang Mai (comfortable and air conditioned) and two days of trekking in the mountains North of Chiang Mai before returning to Chiang Mai and overnight train to Bangkok. It was an excellent tour, well organised and we had a great tour leader and group (only seven in the group including the leader).

The best part of the trip was the time in the mountains which involved trekking, staying in local villages, an elephant ride through the jungle and a trip down the river (with small rapids) on bamboo rafts (you do get wet).

I highly recommend this trip and I am sure I will be doing more trips with Intrepid. 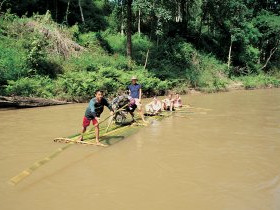